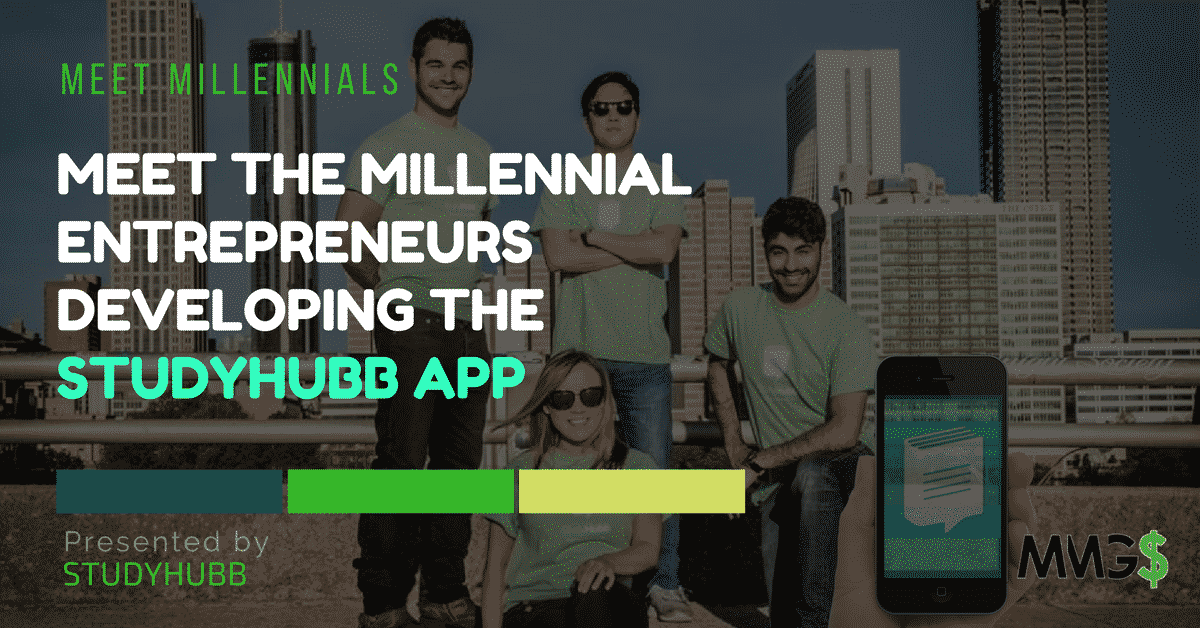 Meet the Millennial Entrepreneurs Developing An App called StudyHubb. It’s an EdTech startup designed to connect students with “study buddies.” How did they get started?

It’s a long night. There’s a low buzz in the library of Berry College. Students are talking and going over class material together. Some come to study, some come to hang out, others come for a bit of both. Connor Garrett, freshly finished with soccer practice, meets his friends for a study session at a table near the back of the library.

The weekend fun and parties are over. It’s time to hit the books again. Alex Chung, a member of the Theta Chi fraternity at Kennesaw State University, is successfully balancing school, work, and frat life. However, he knows it’s not as easy for some of his fellow members.

This is a marathon. The students chip away through the semester at their thesis. As Jawad Mazhir pursues his master’s in marketing at Georgia State University, he’s developed the habit of collaborating with other grad students to work through complex problems together.

It’s his second school in his college career. Richard Fendler transferred from University of Tampa to Stetson University. He has to focus on his coursework, but wants to meet new people at the same time. It’s difficult to do both as a transfer student.

Connor and Alex had been friends since they were in first grade. Even growing up, they would talk about ideas, dreams, and fun solutions to problems. Years later, towards the tail-end of their college careers, they noticed another problem:

Students need to do well in school, but want to satisfy a social itch, too.

They began dreaming up a way to help students balance all the things they have to do, with all the things they want to do. After exploring a thousand possibilities, something clicked. Most of their friends were on the wildly popular dating app Tinder. But why? There were plenty of other apps already. It’s the swiping. It’s fun, it’s easy, it’s gamified.

The solution started to take shape. To help students, the app would have to be fun and easy. Something simple that wouldn’t feel like work. Connor and Alex dug a little deeper. Tutoring platforms had already been done. Besides, even in college, neither could remember ever being tutored. To effectively help students perform better in school, while still leaving room for a social life, Connor and Alex had to come up with a way for them to consolidate their time.

Alex and Connor reached out to Richard Fendler, a good friend they’ve known and trusted since their childhood. All three grew up a few blocks apart in a suburb of Atlanta. The three of them hammered out the fine details of what this ideal app would look like.

That’s when StudyHubb was conceived. StudyHubb is the first “social studying” mobile application to emerge in an era where being the first to do anything is increasingly difficult. Through this mobile application, students simply swipe left (if they’re not interested) or right (if they’re interested) on other students at their university. If both students have swiped right for a successful match, then they began chatting and can set up study dates.

The real beauty of StudyHubb is how it allows students to naturally meet other people at their university, whom they might not ever run into. But now they have the perfect excuse to meet new friends, socialize, and connect organically through studying.

From Ideation to Production

They say the idea is only as good as the people behind it. Connor, Alex, and Richard learned early on how hard it is to find dreamers or people who are willing to invest time, money, and energy into something just by virtue of its potential. Month by month, the three bootstrapped the app, while continually trying to pull resources together in true startup fashion.

Connor met Jawad Mazhir in undergrad at Berry College. They were fast friends, and bonded over hustle and a shared dreamer’s mindset. A few years later, Jawad was close to finished laying the foundation for his accelerator and branding agency Dreams Collective. He had been keeping an eye on StudyHubb, and joined the team. Jawad understood the vision, and saw how the informal partnership behooved both sides.

The original four man team of Connor, Alex, Richard, and Jawad recruited coders, and funded development with money from their day jobs in ad copywriting, sales management, search engine optimization, and web design respectively. However, at the time, this meant they couldn’t afford going through an app development firm.

Months later, StudyHubb was almost ready for a soft launch, but was missing even simple bells and whistles. Through the highs and lows, the team was still eager to launch anyways. That’s when millennial investor Anuj Thakkar took notice of StudyHubb’s potential, and put his money where his mouth was.

Now the development went from a crawl to a literal sprint, in scrum terminology. With this investment, the StudyHubb team made the collective decision to hire Menlo Technologies of Menlo Park, California to get StudyHubb market ready.

The Tinder of Studying

Tinder some massive growth through in-person campaigns. While some apps market online, and by advertisements, swipe-based apps dealing with location or filtered into any subset, need to have lots of users in centralized locations. This is why any swipe-based app must acquire users in groups.

StudyHubb goes after fraternities, sororities, and campus groups and organizations. Additionally, the app has received the support of Berry College, Kennesaw State University, among others, which shows that even the schools themselves see value in how the social studying app will help their students.

When Does it Launch?

According to StudyHubb CEO Connor Garrett and COO Alex Chung, StudyHubb is set to launch soon. However, before it’s fully available to students everywhere, the team will test and gather feedback from students at Berry College, Kennesaw State University, and Loyola Marymount in Los Angeles.

“Millennials love collaboration. We are riding the wave of the future,” says StudyHubb CMO Richard Fendler. “Academics will evolve into social just as we are seeing the workplace trending in that direction. Cubicles are going down, and round table learning is going up.”

Connor Garrett
Connor is the Co-founder of StudyHubb and owner of The Millennial Snowflake.